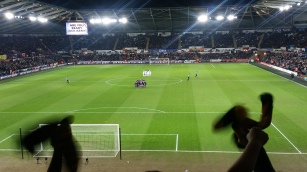 Sunday 17th January
I had not initially planned to write a blog about my weekend to Swansea with dad, Jenny and some old family friends. It wasn’t the best time of year to visit the Gower Peninsular but then ultimately the usual reason for a holiday as the main purpose for going was to see a football match between Watford vs Swansea. Watford occasionally have a cameo appearance in these blogs and whilst just under 10 years ago I used to keep a football blog (hereif anyone is interest) they faded out in February 2010. I started them to document my feelings on our journey in the 2006/2007 Premiership campaign and then continued as hope gradually turned to despair for the next few seasons. Watford are now back in the Premiership but during that time travel has muscled in to become an equal passion which defines me as a person as much as being a Watford fan has in the past (and admittedly still does).

One of the advantages about being a football fan is that you have the opportunity to go away matches and therefore over the years i’ve visited quite a bit of the UK and been to towns and cities I may not have done if I’d never been a Watford fan. I’d have never been on the Grand National Rollercoaster at Blackpool Pleasure Beach or to Plymouth for a weekend of drinking cider and eating pasties. Ultimately an away match can be a lot of fun if everything goes well but even if your team loses it still feels more memorable than a home match but I digress this is not my old football blog.

The night before i’d been to a house warming party so as dad had said we were leaving Berkhamsted at 10.00am I had a very early start to ensure I got to the house in time. Opening the door I saw the remains of a slight snow shower but nothing to get me concerned my journey would be disrupted. Fortunately it didn’t however as I left the suburbs of London, countryside began to replace houses and the scene became more picturesque as the snow got deeper. I arrived in Berkhamsted with time to spare so went on a mini walk from the Castle to my dads via the canal taking some pictures mainly to send to Victoria and others I knew would appreciate the scene more than most of the locals who were treating it in the typical ‘what a nuisance;

After arriving at the house Rob, Sue and Tony soon arrived and after loading our bags in to the car we set off for South Wales. The journey consisted of talk about the upcoming match, the season so far, memories of our trip to India which was sadly pre blog and dad, Tony & Rob discussing one of their upcoming cycle trips through Europe. If there was some way I could convince myself to get on a bike again I can see numerous advantages, I’d get to see more countries, experience the real culture and get fit. Unfortunately I haven’t since a bike ride in Devon went wrong when I was about 12. They say “you should just get back on the bike” but I didn’t.

Our first stop was Bristol somewhere i’ve been two times before without actually seeing any of the tourist sites or indeed any of the city. The snow of Hertfordshire had been replaced by rain and puddles which meant it wasn’t the greatest introduction to the harbour which must be particularly pretty on a warm summers day. We walked along the harbourside up to the SS Great Britain however disappointingly due to the regeneration of the port it wasn’t possible to see it without paying to go round the museum which we didn’t have time to do. Instead we walked where we had come and found a cafe where we had a coffee to warm us up and I had a bacon sandwich because I hadn’t come prepared with lunch like the others.

We got back in the car and I probably fell asleep at some point though not before we crossed in to Wales. We arrived in Swansea and after laughing at the Satnavs attempts at pronouncing Welsh place names we eventually found the Travel Lodge we were staying at. We had an hour or so to freshen up and after discussing some potential walks along the Gower made our way to a Wetherspoons in one of the local suburbs. After enjoying a Sunday Roast and a few ales which were brewed locally we made our way back to our service station located hotel (think Alan Partridge Travel Tavern).

Monday 18th January
After waking up and getting ready we drove to the Wetherspoons for a breakfast. The weather wasn’t particularly inviting but eventually we left and made our way to Worms Head on the coast. By the time we arrived it had at least stopped raining but when we checked the tide times we realised that there would be no opportunity to cross the causeway so instead we did a looped walk which took us along the coast and through farm land. It was certainly picturesque but it was really cold and quite windy so I was glad that I was wearing my big coat.

We arrived back at the car and drove to the ‘Mumbles’ which I had heard of, or at least I thought I had because the walk from the car to the pier was nothing like what I had expected. I had expected a mile packed of pubs/bars and perhaps they are more noticeable at other times of the year but during a cold January the area seemed deserted. Despite it not being what I had expected and the Pier being closed due to I assume the high winds it was a very quaint and nice area though the the old life boat station needed some tlc.

We returned back to the hotel passing the Liberty Stadium on the way so that we could look for some places to park the car. Once back at the hotel we had some time for nap and to get ready for the football but first stopped off at the Wetherspoons again for a pre match beer and some food. It was the beginning of celebrations for Burns night and after trying to work out what to eat, torn between being healthy or not I ended up placing an order for perhaps the most unhealthy burger ever.

Rob and Tony dropped Sue, Jenny, dad and I off at the bottom of a street not far from the ground and we agreed to meet again inside. Swansea fans would have been feeling low on confidence pre kick off and the closure of the steel works would have done little to life spirits. Perhaps knowing this the club had announced the new manager would be in the crowd just before kick off (which always causes the players to step up their game) and had the ball brought to the pitch by some marines abseiling from the top of the stand I was in.

This was my first away match since Everton a game where we had shown energy and hunger. Even during the recent defeats against Man City and Tottenham we had given it a go and been unlucky to lose so I was surprised and slightly horrified that Swansea a team which should have been low on confidence were made to look world beaters. Normally away matches can be fun due to the crowd ‘having a party’ but on the whole we seemed to have as little energy as the players and this was summed up by the lady next to me trying to engage in conversation. The guy in front was in meltdown throughout the first half and ended up turning on the fans for not showing enough passion. Much as I tried to remain optimistic that we would just ‘ride out the storm’ it was little surprise when Swansea took the lead and not long after the Watford players trudged off for half time.

I was able to move up to sit with the others for the second half and we came out with more intent however the only real chances of note fell to Juardao, one of which I thought had gone in. On another night we could, if not should have got a draw but it seemed to be one of those nights all football fans experience which was bitterly disappointing. I went to bed feeling quite disillusioned at how Watford had done and on the back of losing 3 other matches I started to have the fears of relegation which had seemed a distant memory just two weeks before.

Tuesday 19th January
Watford losing can interrupt my sleep, and I kept turning the match over in my head and the next morning I felt particularly groggy. As per the previous day we went to Wetherspoons for breakfast and perhaps spent longer than expected before driving to a village/suburb of Swansea called Bishopton where we planned to walk to the headland. We parked near a small Norman church (St Teilo’s Church) which dates back to a church built around 460-490 AD making it one of the earliest Welsh Christian settlements.

The walk itself was less successful because the route was not well sign posted and the map/directions we were using were older than me. We also kept chatting to locals which reminded me of my time in Aberystwyth where no one was in a hurry, however we kind of were because I needed to be on the train home by mid afternoon. After walking for about 30 minutes we didn’t appear to be any nearer to the headland so Rob, Dad and I returned to the car and met the others on a main road so that we could drive nearer to the coast.

We walked down a single track road and it wasn’t long before we were out of civilisation despite still not being far from Bishopton. Eventually we hit the coast and the sun was shining so the views from Brandy Cove of (I believe) Mumbles Head and Caswell Bay were good. I’ve explored a lot of Wales, especially Mid and North West Wales and the Gower in the South did not disappoint. We were lucky that despite travelling to the Gower in (potentially) the UKs worst month weatherwise not only did we still get to do some lovely walks but we had the views people would have been happy with in the summer.

We returned to the car and drove back to Swansea. I didn’t actually see much of the actual city (besides the football stadium and the train train station) so as I left I felt I had unfinished business and I would definitely return to the Gower. Hopefully Watford and Swansea both stay up and the match next season is the August bank holiday